You can run your CI/CD jobs in separate, isolated Docker containers.

Dec 27, 2020 The Spring Boot Docker image has the name docker-spring-boot-postgres:latest (line 5). Docker builds that image from the Dockerfile in the current directory (lines 6-7) The container name is app (line 8). It depends on the db service (line 10). That's why it starts after the db container. # Start empty Ubuntu container docker run -it ubuntu bash # Show current Ubuntu version lsbrelease -a (See instruction detail from.

If you run Docker on your local machine, you can run tests in the container,rather than testing on a dedicated CI/CD server.

To run CI/CD jobs in a Docker container, you need to:

Register a runner that uses the Docker executor

To use GitLab Runner with Docker you need to register a runnerthat uses the Docker executor.

This example shows how to set up a temporary template to supply services:

Then use this template to register the runner:

The registered runner uses the ruby:2.6 Docker image and runs twoservices, postgres:latest and mysql:latest, both of which areaccessible during the build process.

What is an image

The image keyword is the name of the Docker image the Docker executoruses to run CI/CD jobs.

By default, the executor pulls images from Docker Hub.However, you can configure the registry location in the gitlab-runner/config.toml file.For example, you can set the Docker pull policyto use local images.

Define image in the .gitlab-ci.yml file

You can define an image that's used for all jobs, and a list ofservices that you want to use during runtime:

The image name must be in one of the following formats:

Introduced in GitLab and GitLab Runner 9.4.

You can use a string or a map for the image or services entries:

For example, the following two definitions are equal:

Where scripts are executed

When a CI job runs in a Docker container, the before_script, script, and after_script commands run in the /builds/<project-path>/ directory. Your image may have a different default WORKDIR defined. To move to your WORKDIR, save the WORKDIR as an environment variable so you can reference it in the container during the job's runtime.

Introduced in GitLab and GitLab Runner 9.4.

Overriding the entrypoint of an image

Introduced in GitLab and GitLab Runner 9.4. Read more about the extended configuration options.

Before explaining the available entrypoint override methods, let's describehow the runner starts. It uses a Docker image for the containers used in theCI/CD jobs:

To override the entrypoint of a Docker image,define an empty entrypoint in the .gitlab-ci.yml file, so the runner does not starta useless shell layer. However, that does not work for all Docker versions.

The syntax of image:entrypoint is similar to Dockerfile's ENTRYPOINT.

Let's assume you have a super/sql:experimental image with a SQL databasein it. You want to use it as a base image for your job because youwant to execute some tests with this database binary. Let's also assume thatthis image is configured with /usr/bin/super-sql run as an entrypoint. Whenthe container starts without additional options, it runsthe database's process. The runner expects that the image has noentrypoint or that the entrypoint is prepared to start a shell command.

With the extended Docker configuration options, instead of:

You can now define an entrypoint in the .gitlab-ci.yml file.

Define image and services in config.toml

Look for the [runners.docker] section:

The image and services defined this way are added to all jobs run bythat runner.

Define an image from a private Container Registry

To access private container registries, the GitLab Runner process can use:

To define which option should be used, the runner process reads the configuration in this order:

There are two approaches that you can take to access aprivate registry. Both require setting the CI/CD variableDOCKER_AUTH_CONFIG with appropriate authentication information.

See below for examples of each.

As an example, let's assume you want to use the registry.example.com:5000/private/image:latestimage. This image is private and requires you to sign in to a private containerregistry.

Let's also assume that these are the sign-in credentials:

Use one of the following methods to determine the value of DOCKER_AUTH_CONFIG: 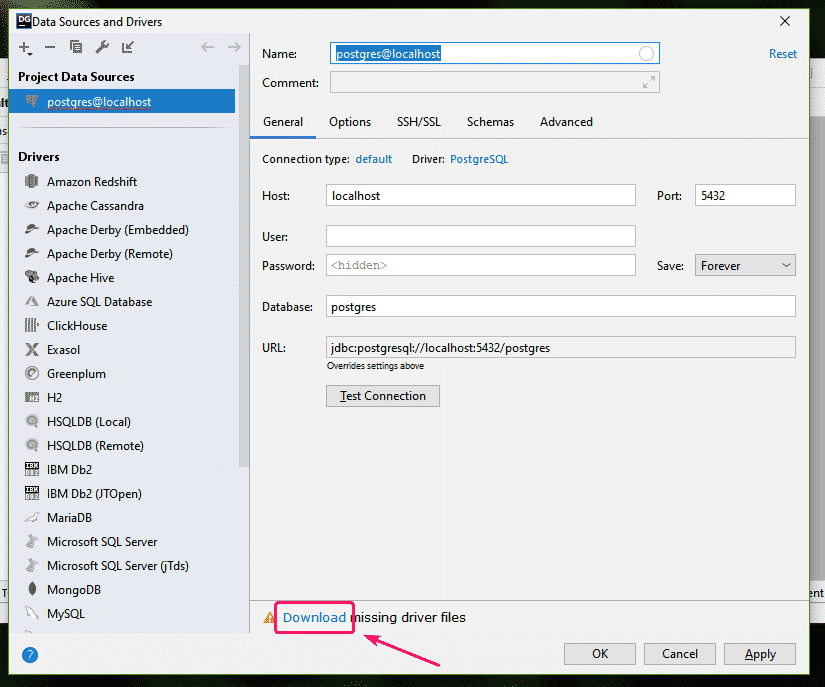 To configure a single job with access for registry.example.com:5000,follow these steps:

You can add configuration for as many registries as you want, adding moreregistries to the 'auths' hash as described above.

If you have many pipelines that access the same registry, you shouldset up registry access at the runner level. Thisallows pipeline authors to have access to a private registry just byrunning a job on the appropriate runner. It also helps simplify registrychanges and credential rotations.

This means that any job on that runner can access theregistry with the same privilege, even across projects. If you need tocontrol access to the registry, you need to be sure to controlaccess to the runner.

To add DOCKER_AUTH_CONFIG to a runner:

Use a Credentials Store

To configure a Credentials Store:

As an example, let's assume that you want to use the aws_account_id.dkr.ecr.region.amazonaws.com/private/image:latestimage. This image is private and requires you to log in into a private container registry.

You can add configuration for as many registries as you want, adding moreregistries to the 'credHelpers' hash.

In a previous article, we explained the difference between Docker images and Docker containers. In short: An image is like a Java class, and containers are like Java objects.

In this tutorial, we'll look at the various ways of removing Docker images.

The Docker Engine stores images and runs containers. For that purpose, the Docker Engine reserves a certain amount of disk space as a “storage pool” for images, containers, and everything else (such as global Docker volumes or networks).

Once that storage pool is full, the Docker Engine stops working: We can't create or download new images anymore, and our containers fail to run.

We also remove images to keep our Docker Engine organized and clean. For instance, we can easily create dozens of images during development that we soon don't need anymore. Or, we download some software images for testing that we can dispose of later.

We can easily remove a Docker image that we pulled from a Docker repository: If we ever need it again, we'll just pull it from the repository once more.

But we have to be careful with Docker Images we created ourselves: Once removed, our own images are gone unless we saved them! We can save Docker images by pushing them to a repository or exporting them to a TAR file.

PostgreSQL is an open-source relational database. We'll use the first two PostgreSQL 13 beta Docker images as examples. These two images are relatively small, so we can download them quickly. And because they are beta software, we don't have them in our Docker Engine already.

But before we download these two images, let's check first how much space Docker images take up in the storage pool:

Here's the output from a test machine. The first line shows that our 71 Docker images use 7.8 GB:

Now we download the two PostgreSQL images and recheck the Docker storage pool:

Here is the running container on the test machine: 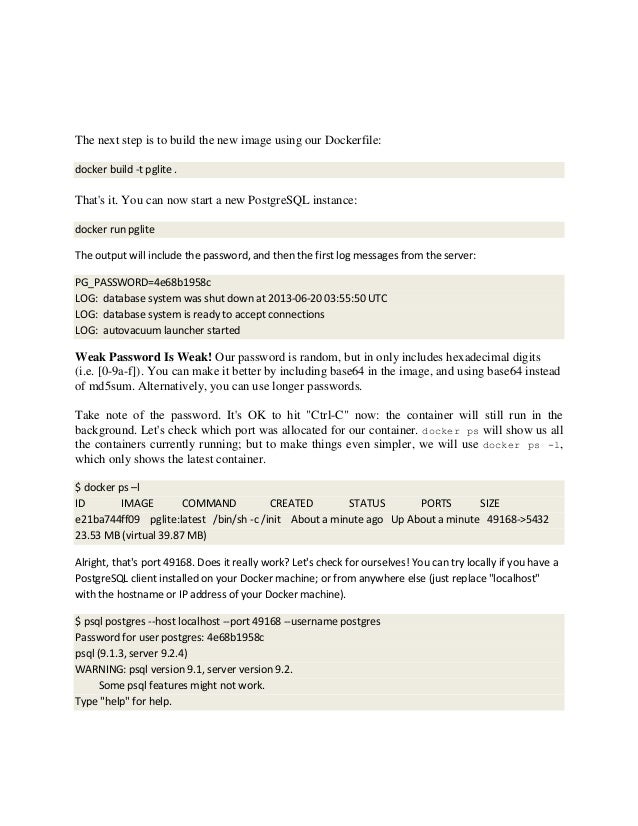 Now let's remove the PostgreSQL 13 beta 2 image. We use docker image rm to remove a Docker image. That command removes one or more images:

This command fails because a running container still uses that image:

So let's stop that running container by using its ID, which we obtained from docker ps:

We now try to remove the image again – and get the same error message: We can't remove an image used by a container, running or not.

The Docker Engine prints details of the image removal:

The docker system df confirms the removal: The number of images decreased from 73 to 72. And the overall image size went from 8.1 GB to 8.0 GB:

Let's download the PostgreSQL 13 beta 2 image again that we just removed in the previous section:

We'll reference images by repository and tag, like in a docker pull command: The repository is postgres, the labels are 13-beta1-alpine and 13-beta2-alpine.

So, to remove multiple images by name, we need to:

Let's start putting these together. To test for correctness, let's run just the first two of these pieces:

And on our test machine we get:

Now given that, we can add it to our docker image rm command:

As before, we can only remove images if no container, running or stopped, uses them. We then see the same image removal details as in the previous section. And docker system df shows that we're back to 71 images at 7.8 GB on the test machine:

This image removal command works in a terminal on Linux and Mac. On Windows, it requires the “Docker Quickstart Terminal” of the Docker Toolbox. In the future, the more recent Docker Desktop for Windows may work with this Linux command on Windows 10, too.

An excellent way to save disk space is to remove the largest Docker images first.

Now docker image ls can't sort by size, either. So, we list all images and sort that output with the sort command to view images by size:

which on our test machine outputs:

Next, we manually review to find what we want to remove. The ID, column three, is easier to copy and paste than the repository and tag, columns one and two. Docker allows removing multiple images in one go.

Let's say we want to remove nextcloud:latest and nextcloud:19.0.0-apache. Simply put, we can look at their corresponding IDs in our table and list them in our docker image rm command:

As before, we can only remove images not used by any container and see the usual image removal details. Now we're down to 69 images at 7.1 GB on our test machine:

Docker can remove images by their creation date. We'll use the new docker image prune command for that. Unlike docker image rm, it is designed to remove multiple images or even all images.

Another way to remove images by their creation date is to specify a time span instead of a cut-off date. Let's say we wanted to remove all images older than a week:

Note that the Docker filter option requires us to convert that time span into hours.

This prints a warning message. We have to enter y and press Enter to proceed:

So on the test machine, this removed one stopped container.

Let's look at the top of the Dockerfile for the PostgreSQL beta 2 image to see what image it's extending:

This command also requires us to enter y and press Enter to proceed:

On the test machine, this didn't remove any images.

docker image prune -a removes all images not used by containers. So if we don't have any containers (running or not), then this will remove all Docker images! That is a dangerous command indeed:

On the test machine, this removed all images. docker system df confirms that neither containers nor images are left:

Get started with Spring 5 and Spring Boot 2, through the Learn Spring course:

>> CHECK OUT THE COURSE